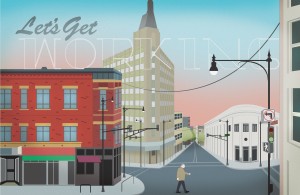 I’m teaming up with the wonderful Paul Dailing of 1,001 Chicago Afternoons, in a reprise of last year’s Chi Lit event, to curate a reading of neighborhood poetry and stories for UChicago’s Studs Terkel Let’s Get Working festival. We’ll have Kush Thompson, Malcolm London, Jim Padar, Lily Be, and Kimberly Dixon-Mays reading pieces about Austin, the Near West Side, Humboldt Park, and Hyde Park. It’s going to slay, in the parlance. Mark it down: Saturday, May 10th at 2 pm, in UChicago’s Logan Center (915 E. 60th Street). And check out the other events of the festival: it’s packed full of 3 days awesomeness.

Below is a post I wrote for the festival blog explaining the origins and philosophy behind the Anthology of Chicago project. Enjoy.

I can’t think of a personage more evocative of the spirit of Anthology of Chicago than Studs Terkel. As an oral historian who–quite literally–captured the voices of people from all walks of life, he weaved a richly complex portrait of the city from the ground level. Through Studs’ legacy, in books like Division Street: America, we come to better understand what comprises the urban environs and what it means to dwell within them. Even now, these things hold true. When we understand Chicago, we understand ourselves better.

Anthology of Chicago started out of a curiosity around what the lens of creative forms like poetry and fiction could reveal about the city and everything that dwells within that universe. Chicago and poetry are two abiding loves of mine and of many others. So I wondered what would happen if we dropped them on top of one another, so to speak. What does it mean to write a poem about an urban space like a neighborhood? What does it reveal–about that space in particular; about neighborhoods, Chicago, cities in general; about the person who wrote it?

It was from these thoughts that I developed my criteria for the project: works that sit at the intersection of place & the personal, that speak to both the author’s unique perspective, but also have something to say about their neighborhood of choice. I think the best poems, period, have the ability to change the way we look at the world. This outcome seems all the more important when the poems (and stories–I’m revealing my poetry bias here) directly take urban space as their subject. Poetry and other creative works serve as lenses to clarify, and complicate, our understanding of this urban space.

I want the works on Anthology of Chicago to pique people’s interest in the place that they’re living, foreground the city and its neighborhoods in people’s minds. I want the poems and stories to deepen people’s relationships to neighborhoods both familiar and not. I want poems that bleed same way this city does and that likewise move people the way that God knows Chicago does. I want them to show why and how this city matters in different ways to different people.

I had been tossing these ideas around in my head for awhile and finally launched the project at the beginning of 2013. My home turf of Hyde Park was the first neighborhood, and I ran it as sort of a pilot to assess interest. And of course Chicago wasn’t going to let me off easy: there was a lot of legwork that involved hanging up flyers, sending emails, and talking about the project to different people.

It took a bit, but submissions started coming in, and they blew me out of the water: for example, Steven Schroeder’s “Mutual Invisibility,” which uses UChicago’s Linné statue as a focal point, or Kimberly Dixon’s “Hyde Park Walking Tour,” a funny and utterly devastating takedown of the neighborhood’s fraught history around race relations. These are pieces that exemplify what I’m looking for with Anthology of Chicago: they capture some tiny slice of what Hyde Park is, and they’re infused with, but not overwhelmed by, their respective authors’ perspective.

At some point in the spring of 2013, I met Paul Dailing, who runs a wonderful project called 1,001 Chicago Afternoons. Inspired by 1920s newspaper columnist Ben Hecht, he’s written at this point hundreds of true stories that take place in neighborhoods across the city. As soon as I found his project, I could tell we were of the same mind, and reached out right away. We ended up putting on an event that August called Chi Lit: Tales of the Neighborhoods, where we gathered poets and storytellers to read about Bronzeville, Rogers Park, Logan Square, and a bevy of other places. We packed Cole’s and raised over $600 for youth literacy programs at Open Books. It was huge for me to see this project, which started as a web thing, become manifest in the real world and draw so many people, in Anthology of Chicago’s same spirit of spinning neighborhood tales and poems.

Paul and I are curating a similar event for the Studs Terkel festival, and it’ll feature readers with pieces about Austin, Humboldt Park, Pilsen, and more. Mark us down for Saturday, May 10th, at 2 pm. It’s not to be missed.

At the time of this writing, Anthology of Chicago features poems and stories about 11 different neighborhoods, including Albany Park, Beverly, and Englewood. Submissions are open on a rolling basis and we’re regularly publishing new works. Check it out: you may find it rekindles your love for the neighborhood you’re living in, or teaches you something new about an unfamiliar place. The pieces there invoke worlds at once both familiar and strange. If I may shamelessly tweak the motto of Studs’ and my alma mater: let knowledge grow from more to more; and so be urban life enriched.